Hip Replacements Not Just For The Elderly 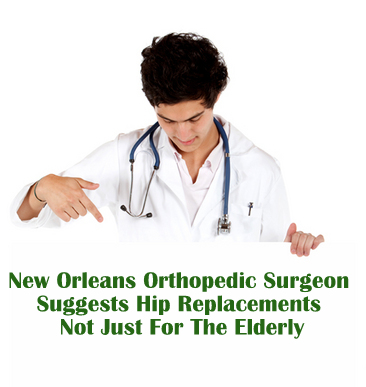 According to New Orleans orthopedic surgeon Dr. Richard Meyer, hip replacements are no longer just for his elderly patients, as an increasing number of baby boomers and people in their 40s are opting for hip replacement surgery.

The rise is a result of the large boomer population as well as an increased attempt to maintain their active lifestyles as they age.

Your New Orleans orthopedic surgeon has known for a long time that he would be performing many more hip replacements. And the big push for that is that the baby boomer patients – whether they are older or younger – are less tolerant of consenting to a more sedentary or less active lifestyle than they have been in the past.

Another explanation for the increase in hip replacement surgery for our aging population is that patients – who maybe 20 or 25 years ago didn’t think that they would be able to return to the active lifestyle that they can achieve now with the implants – have now realized that they can.

Because of technological improvements, modern hip implants have a much longer life span than those in the past. Your New Orleans orthopedic surgeon advises his patients that there is a 90 percent chance that the device that is implanted will last over 20 years.

The weakest link in the procedure has been where the new hip ball met the new hip socket. But today’s implants are constructed with stronger and better plastic than that used in the past, resulting in an extended longevity of today’s hip implants.

The average cost for total hip replacement is approximately $30,000, but keep in mind that prices can vary widely depending on location, experience, etc. The recovery period has shortened for all age groups, with the 45-54 age group remaining in the hospital for an average of three days, while those aged 75 remained hospitalized for more than four days.

It’s not uncommon for patients to come back to see their New Orleans orthopedic surgeon at 3 weeks post-op, reporting very little pain and the ability to walk and do many activities of daily living even without assisted devices like canes or walkers.

If you are interested in learning more about hip replacements surgery – regardless of your age – call the office of New Orleans orthopedic surgeon Dr. Richard Meyer today to Schedule a Consultation.